Triumph had recently disclosed the striking-new 2021 Trident 660. This new middleweight roadster bike from the British two-wheeler manufacturer has grabbed the attention of people around the globe, including the people of India, and that too in a small amount of time.

According to the latest reports, the two-wheeler automaker is not going to launch the Trident 660 alone. But Triumph is planning to introduce two brand new motorcycles, which are based on the new 660-platform.

An image from the recent dealership summit of Triumph was leaked which suggests that Triumph is planning to launch two new motorcycles soon which will be based on the Trident 660.

The picture shows images of three motorcycles out of which the Trident 660 roadster is standing in the middle whereas the new adventure model bike is on the left and a new adventure-sport model on the right side. 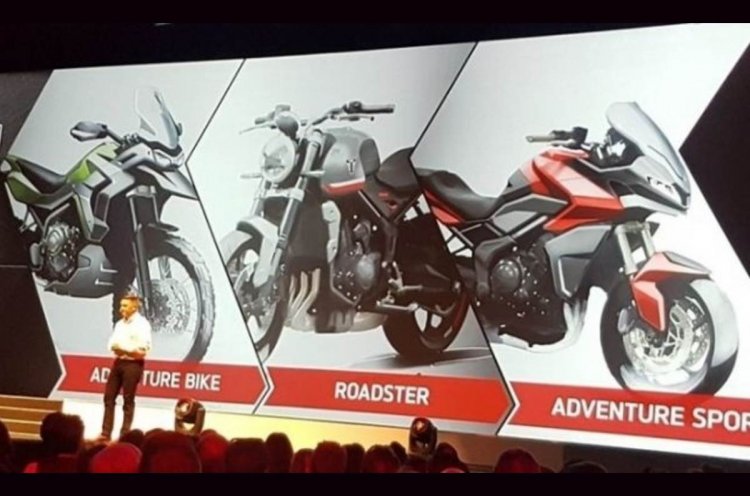 The New Adventure Bike From Triumph

The bike on the left side in the image, adventure model, looks a lot like the all-new Triumph Tiger 900. Even in terms of design, the new Trident 660-based adventure model has taken several cues from the Tiger 900.

Some of the features include but not limited to: a twin pair of LED DRLs, the front-end features spoke wheels along with twin discs, and the front suspension setup seems to be made for long rides. The new bike also has a sizable bash plate and its ground clearance seems to be pretty high.

The New Adventure-Sport Bike From Triumph

The other new bike based on the Trident 660 is going to be included in the adventure sports segment. Some of the features of the adventure-sport model will include a sharply designed semi fairing, a set of twin headlamps, a pair of USD forks along with twin-discs on the front wheels.

The tyres seem more inclined towards riding on the road and are wrapped with a pair of alloy wheels, giving it a sporty look. Also, the riding position seems somewhat upright however, it is slightly forward-leaned to give the sporty feel to the rider.

Even though the company has not made anything official about these two new motorcycles, this whole idea of two new bikes makes sense as Triumph has invested a lot of their resources and time in developing the new 660 Platform. So, why would they use it for just a single product!

Also, if we consider the growth in popularity for middleweight motorcycles, the new Adventure 660 and Adventure-Sport 660 based on 660-platform is surely going to stir up enthusiasm among people.