Tata Motors has announced details revealing the public previews for the Harrier, which will start from December 18, 2018. According to the details shared by the company on their social media platforms, the first public preview of the Harrier is scheduled to take place next week in Gurugram on December 18 and 19.

There will be a special preview for customers who have already pre-booked Harrier at these locations from 9 AM to 11 AM while the preview will be open to everyone from 11 AM – 9 PM. Tata Motors also claims to have a surprise collector’s item for every customer who books the Harrier at the location. 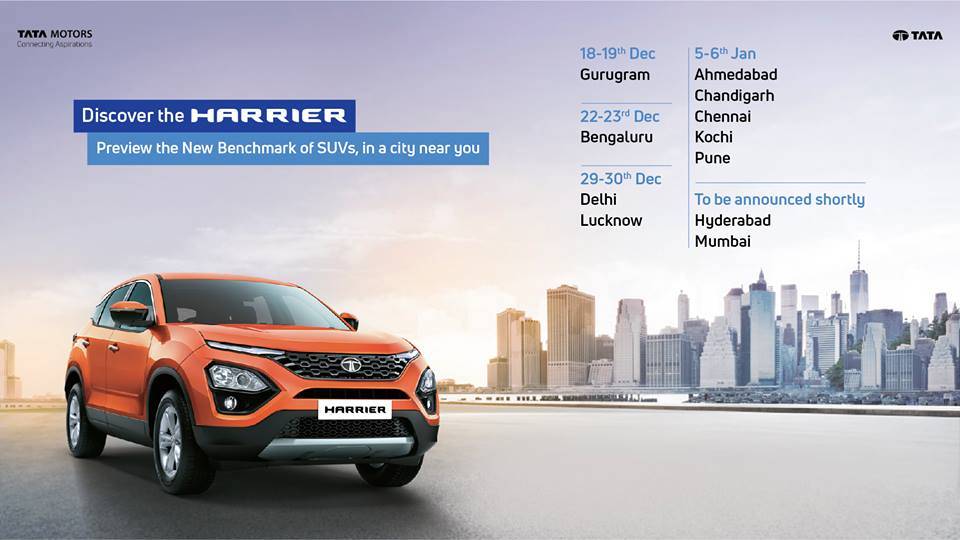 A few other highlights of the upcoming Tata Harrier include LED DRL’s positioned above the blacked-out honeycomb grille, with the main headlamp clusters that house projector units sitting below it. The dual tone front bumper also comes equipped with fog lamps. On either side, the model comes with a floating roof design, while the compact SUV rides on 17-inch alloy wheels wrapped in 235/65 R17 tyres. At the rear, the model features LED tail lights separated by a piano black insert.

Also Read: Rolls-Royce Motor Cars Has Launches Their First Ever SUV in India, The Cullinan

Powering the Harrier is a 2.0-litre Kyrotech diesel engine that produces a maximum power output of 140 hp at 3,750 rpm and 350 Nm of torque between 1,750-2,500 rpm. This BS-IV emission compliant motor comes paired to a six-speed manual transmission as standard while an automatic transmission will be introduced later in the product’s lifecycle.