The word “Advanced Driver Assistance Systems” or “ADAS” applies to an increasing range of safety features aimed at improving driver, rider, and pedestrian safety by decreasing the intensity and the total number of motor vehicle accidents.

ADAS will alert drivers to possible hazards, interfere to help the driver maintain control, and, if necessary, lessen the intensity of an incident if it cannot prevent it. Simply put, ADAS compensates for our faults, whether they be due to inattention, wrong control inputs, or, up to a point, sheer ignorance. We’re not flawless; as painful as it is to acknowledge it, nevertheless, ADAS is here to assist.

What is ADAS, and how does it work?

With exponential advancements in autonomous vehicles, automobiles are the cornerstone of the next generation of smartphone-affiliated devices. Systems on a chip are independent device solutions partitioned into different fragments. These processors use interfaces and top-quality electronic controller units (ECUs) to connect sensors to actuators.

To achieve a 360-degree vision, self-driving vehicles use various applications and technology, both close (in the vehicle’s immediate vicinity) and far. As a result, more sophisticated process nodes are being used in hardware designs to achieve ever-higher performance goals while reducing power and footprint demands.

In the past, significant vehicle safety enhancements (such as shatter-resistant glass, three-point seatbelts, and airbags) were passive safety interventions meant to prevent damage during an accident. With the aid of embedded vision, ADAS systems will now actively improve safety by reducing collisions and injuries to occupants.

The addition of cameras in the vehicle necessitates introducing a new AI feature that utilizes sensor fusion to recognize and process artefacts. Sensor fusion incorporates vast quantities of data with the aid of image recognition tools, ultrasound sensors, lidar, and radar, analogous to how the human brain processes information. This system is capable of reacting physically faster than a human driver. It can process streaming content in real-time, understand what it’s revealing, and decide how to respond. The following are some of the most popular ADAS applications: 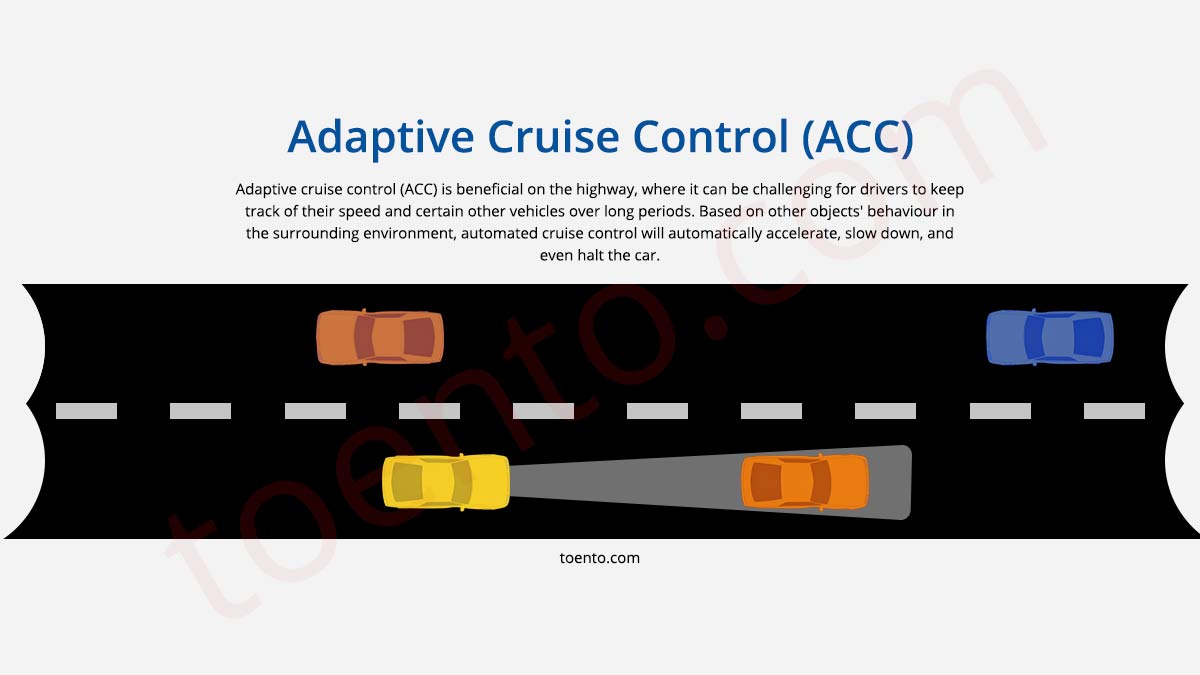 Adaptive cruise control (ACC) is beneficial on the highway, where it can be challenging for drivers to keep track of their speed and certain other vehicles over long periods. Based on other objects’ behaviour in the surrounding environment, automated cruise control will automatically accelerate, slow down, and even halt the car. 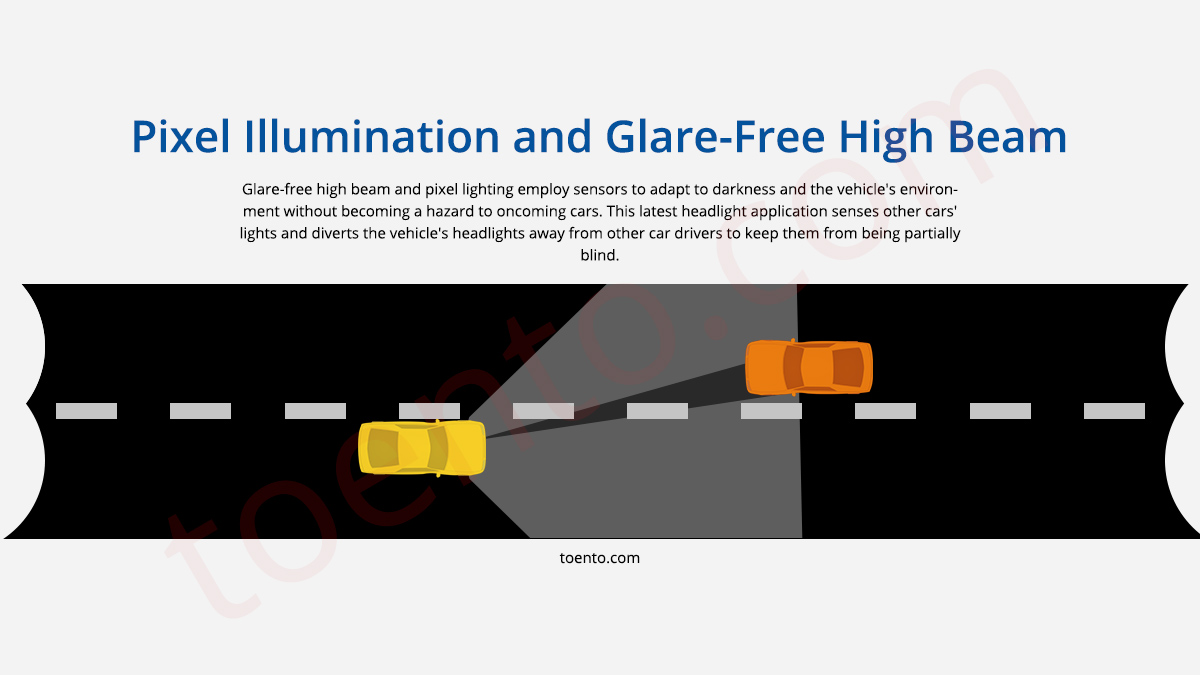 Glare-free high beam and pixel lighting employ sensors to adapt to darkness and the vehicle’s environment without becoming a hazard to oncoming cars. This latest headlight application senses other cars’ lights and diverts the vehicle’s headlights away from other car drivers to keep them from being partially blind.

Adaptive light control adjusts the headlights of a car according to the different lighting outside. Depending on the vehicle’s climate and darkness, it changes the headlight’s intensity, angle, and rotation.

Drivers will be alerted to blind spots with automatic parking, allowing them to know when to steer the steering wheel and apply the brake. Traditional side mirrors are inferior for cars fitted with rearview cameras, which offer a clearer view of the surroundings. By integrating multiple sensors’ input, some devices could even execute parking without any of the driver’s assistance.

Autonomous valet parking is a revolutionary innovation that handles cars in parking areas using vehicle sensor meshing, 5G network connectivity, and cloud services. The car’s sensors supply details about its present location, where it wants to go, and how to get there efficiently. All of this data is processed and used to monitor the vehicle’s accelerating, braking, and steering until it is securely parked.

Car navigation systems provide on-screen directions and voice reminders to assist drivers in navigating a path while focusing on the lane. Some navigation systems can display real-time traffic updates and, if necessary, prepare a new route to prevent traffic jams. Advanced devices can also have Heads-Up Displays (HuD) to help drivers remain focused on the street.

7. Vision in the dark

Sensors are used by blind-spot warning devices to provide drivers with critical information that may otherwise be difficult or hard to access. When they sense an obstacle in the driver’s blind spot, such as when the driver attempts to shift into an occupied lane, specific devices sound a warning.

Automatic emergency braking detects when the driver collides with another car or other ground structures using sensors. This program will monitor nearby traffic and warn the driver if there is a risk. Many emergency braking systems will take preventive safety steps to stop a crash, including tightening seat belts, minimizing speed, and active steering.

This latest ADAS feature assists the vehicle in dealing with heavy crosswinds. This system’s sensors can sense high pressure acting on the car when driving and apply braking to the wheels being impacted by crosswinds.

11. Identification of drowsiness in drivers

Driver drowsiness monitoring senses sleepiness or other road disturbances and alarms the driver. There are many ways to tell if a driver’s concentration is waning. In one instance, sensors will examine the driver’s head position and heart rate to see if they suggest drowsiness. Some devices send out driver warnings that are close to the lane identification warning signals.

Another way to determine a driver’s concentration is by using a driver monitoring system. The camera sensors will indicate if the driver’s eyes are now on the lane or if he or she is drifting. Noises, vibrations in the steering wheel, or blinking lights may all be used to warn passengers. In certain situations, the vehicle will go to the extreme by entirely halting the engine.

This highly anticipated 5G ADAS feature offers V2X (vehicle-to-everything) connectivity between the car and other cars or pedestrians, with improved reliability and lower latency. For real-time navigation, thousands of vehicles today link to mobile networks. Using existing approaches and the mobile network, this software will improve situational awareness, track or prescribe speed improvements to account for traffic congestion, and upgrade GPS maps with real-time alerts. V2X is needed to aid over-the-air (OTA) software upgrades for the growing number of software-driven systems in automobiles, including map updates, bug fixes, security updates, and much more.

Alcohol ignition interlock systems prevent drivers from starting their cars if their breath alcohol content exceeds a set limit. The Automotive Coalition for Traffic Safety and the National Highway Traffic Safety Administration has proposed a Driver Alcohol Screening System for Safety (DADSS) initiative that will mandate the installation of alcohol detection systems in all vehicles.

When a vehicle starts to skid, anti-lock braking systems (ABS) regulate brake pressure to maintain the tires’ grip. ABS devices can help drivers who lose control of their vehicle and assist them in accidents such as when their car begins to skid on ice. ABS systems have been standard in cars since their adoption increased in the 1990s.

A collision avoidance system, also known as a pre-crash system, employs small radar detectors, which are usually mounted at the front of the vehicle to assess the vehicle’s proximity to surrounding barriers and alert the driver to the possibility of a collision. These devices can account for any unexpected changes in the car’s surroundings that could result in a crash. Multiple measures, such as sounding a warning, adjusting passengers’ seat belts, closing a sunroof, and lifting reclined seats, may be performed in response to a potential crash situation.

17. Identification of drowsiness in drivers

Driver drowsiness warning systems aim to avoid crashes caused by fatigued drivers. The car gathers data such as facial patterns, steering activity, driving habits, turn signal use, and diving velocity to assess whether the driver’s behaviours equate with drowsy driving. If drowsy driving is suspected, the car will generally emit a loud warning, and the driver’s seat can vibrate.

The speed of the car and the automobile in front of it and the open space around the vehicle are tracked by forwarding Collision Warnings (FCW). If the car comes near the car in front of it, the FCW systems will notify the driver of a potential imminent crash. Currently, FCW devices only send an alarm signal to the driver in the form of an audible alert, a visible pop-up monitor, or other alert indicators; they do not assume the car’s control.

Pedestrian safety systems are meant to reduce the number of crashes or accidents that occur when a car collides with a pedestrian. If the front of a vehicle hits a pedestrian, this device uses cameras and sensors to detect it. The vehicle’s bonnet raises in the event of a crash, providing a cushion between the vehicle’s heavy engine parts and the pedestrian. If the pedestrian’s head collides with the car, this reduces the risk of a severe head injury.

A traction control system (TCS) stops vehicles from losing traction and turning abruptly. Limiting tire slip, or where the impact on a tire reaches the tire’s resistance, lets the driver propel the vehicle without losing balance by limiting power delivery and limiting power delivery. The wheel-speed sensors used in these technologies are the same ones used in antilock brake systems. TCS controls when one tire turns faster than the others by installing independent wheel braking systems.

22. Alert for going in the wrong direction

When drivers are observed driving on the wrong side of the lane, wrong-way driving warnings are issued. Sensors and cameras in vehicles equipped with this device can detect the direction of approaching traffic flow. This technology, when used in combination with lane warning services, will warn drivers when they partly cross into the wrong side of the road.

What is the significance of ADAS?

According to the National Highway Traffic Safety Administration’s (NHTSA) Traffic Safety Details Study Note from August 2016, “the country lost 35,092 people in accidents on U.S. roadways during 2015.” “The highest percentage growth in nearly 50 years,” according to the study. According to a survey, human negligence was blamed for 94% of the injuries, with the remainder were caused by the surrounding and technological faults.

ADAS in the future

The trend is moving away from dispersed ADAS electronic controller units (ECUs) toward a centralized ADAS domain controller. This implies that we are now at Level 2 (Partial Driving Automation), where the automobile can handle both steering and speed but is not capable of self-driving because a person sits in the driving seat and can assume control of the vehicle at any moment.

Any component of the car is engineered to be more linked, necessitating subsystem and SoC designers to go beyond conventional safety measures to ensure physical safety. ADAS applications gain more precision, power consumption, and performance by incorporating the new integrated computer vision and deep learning techniques into automotive SoCs.

You can read more about what is Adas on Wikipedia.